Shares of Talktalk Telecom Group PLC (LON:TALK) have been given an average recommendation of “Hold” by the nine brokerages that are presently covering the stock, Marketbeat reports. Three analysts have rated the stock with a sell recommendation, three have issued a hold recommendation and three have given a buy recommendation to the company. The average 1 year price objective among analysts that have updated their coverage on the stock in the last year is GBX 107.29 ($1.37).

The business also recently announced a dividend, which will be paid on Friday, August 7th. Shareholders of record on Thursday, July 9th will be given a dividend of GBX 1.50 ($0.02) per share. This represents a yield of 1.58%. The ex-dividend date is Thursday, July 9th. This is an increase from Talktalk Telecom Group’s previous dividend of $1.00. Talktalk Telecom Group’s payout ratio is currently 22.73%.

Featured Article: How a Strangle Strategy is different from a Straddle Strategy 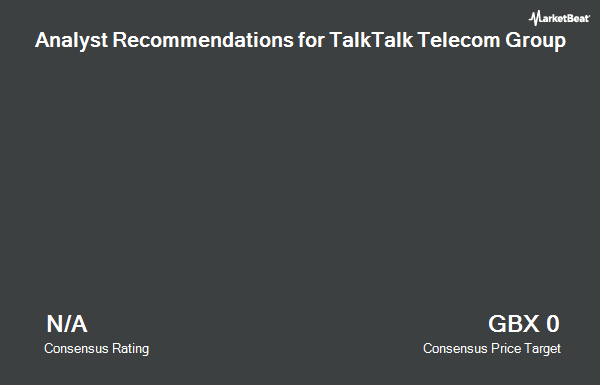 Complete the form below to receive the latest headlines and analysts' recommendations for Talktalk Telecom Group with our free daily email newsletter: